The Pekin duck is a domesticated duck used primarily for egg and meat production. It was bred from the Mallard in China, it was brought to the United States about 1873, where it is the most popular commercial duck breed.

Due to its friendly nature, more and more people are enjoying this breed as pets.

Their average lifespan (if not used for meat production) is about 9 to 12 years.

It is widely believed that Donald Duck is modeled after a Pekin duck.

The mascot of the insurance company Aflac is a Pekin duck.

Adult Pekin ducks weigh between 8 and 11 pounds (3.6 and 5 kilograms) in captivity.

They are characterized by a yellow bill and creamy white plumage, with orange shanks and toes. The ducks have an upright carriage and a peculiarly upturned rump.

Their plumage is mostly white sometimes with a yellowish tinge. This is more obvious with ducks that have been reared indoors and not exposed to sunlight.

The ducks have a more upright stance than dabbling ducks, and possess an upturned rump.

When young it is difficult to determine the gender of the duck; when older the male ducks acquire a curled tail feather. Ducklings have bright yellow plumage.

Pekin Ducks have a nice temperament and, therefore, make excellent pets. Owners report that their friendly ducks follow them around like dogs would.

They are great egg-layers, but not brooders. So many times eggs have to be artificially incubated if chicks are to result.

Pekin duck embryos take around 28 days to develop in the egg at 99.5°F (37.5°C) and 55-75% humidity. A heartbeat can usually be seen by the third day of incubation when candling the egg. The eggs must be regularly turned during incubation. This occurs in nature when the female duck shifts her position while sitting on the eggs. For artificial ncubation, machines are available which will constantly turn the eggs. When being artificially incubated, the eggs are moved to a "hatcher" three days before they are due to hatch. This has a slightly lower temperature and higher humidity which increases the survivability of the hatchlings while their protective down develops. Compared with other birds, duck eggs are relatively easy to hatch as they are very forgiving of variations in temperature and humidity.

Pekin hatchlings have bright yellow plumage with an orange bill, shanks, and feet. Hatchlings should not be given free access to swimming water unless they have been hatched naturally by other ducks. The feathers of a young duckling are not sufficiently developed to properly protect them for extended periods in the water and they do not produce enough preen oil to waterproof this plumage. In the wild, a mother duck will monitor the time her ducklings spend in the water as well as supplying additional preen oil to supplement what is produced by the hatchlings.

It can be difficult to determine the gender of the young ducklings due to the lack of external genitalia or other differences. Venting is one common method. This entails gently squeezing the duckling to cause faeces to be expelled, which forces the cloaca to open slightly, permitting the sexer to view the sexual organs. However, these are almost undifferentiated in hatchlings.

As a male duck matures it acquire a curled tail feather called a drake feather, and their vocalisations become much weaker, they also contain 1 black feather on their back underneath their wings. Coversely, the female develops a loud quack. Venting is also easier when the ducks' genitals are fully mature but is not necessary because of the readily apparent external differences between males and females.

An adult Pekin will lay an average of 200 eggs per year if it does not try to, or is prevented from, hatching them. They will normally only lay one egg on any given day. They will lay their eggs in what they consider to be safe place and will often lay where another duck has already laid. Ducks can be tricked into laying eggs where desired by placing a golf ball or similar object in a place where they might normally lay. Pekin ducks are less "broody" than other ducks which means that they are less likely to sit on their eggs until they hatch. Hens can be used to sit on the duck eggs, or they can be incubated artificially. Pekin ducks, for the most part, are too heavy to get airborne. However, individual ducks may be lighter and capable of short flight, so clipping their flight feathers or (pinioning) their wings will ensure that they will not be able to fly away. They are gregarious and will usually group together. As with most waterfowl, the Pekin duck has feet that are perfect for paddling through water but less suited to walking around on the ground. They are happiest when they have free access to water in which to swim and mate. When catching a Pekin duck it is important not to grab it by the legs but rather to grasp by the neck which is less likely to break. 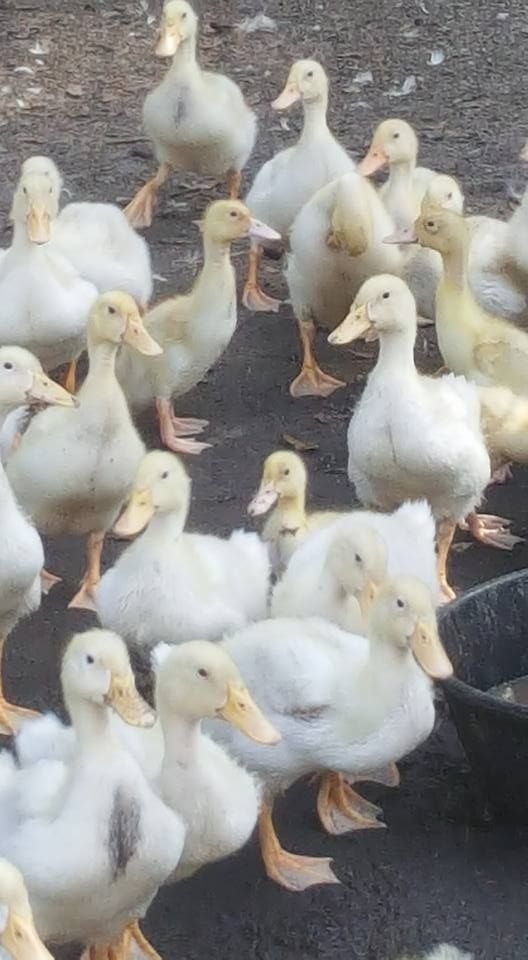 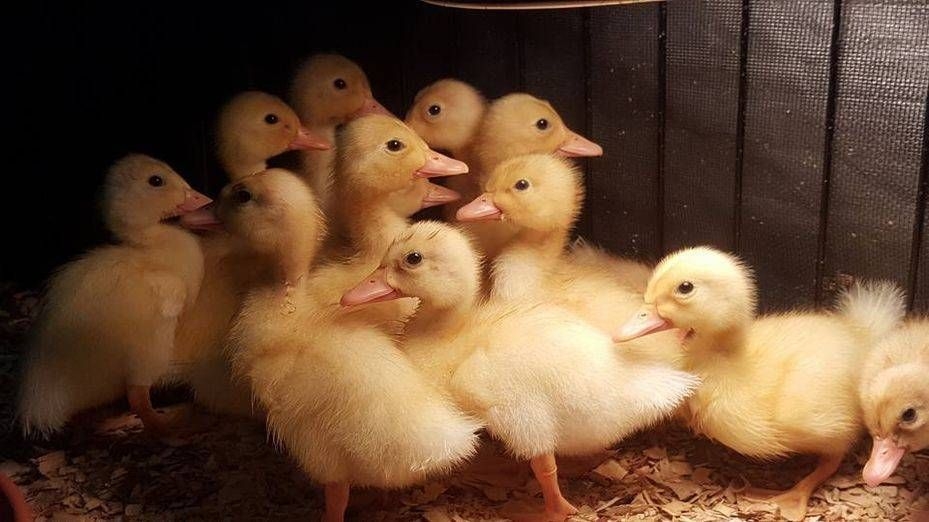 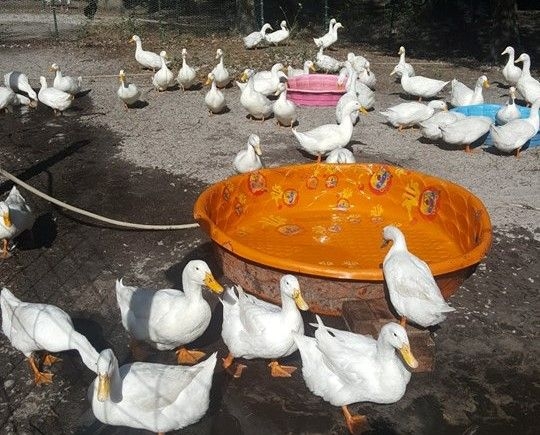